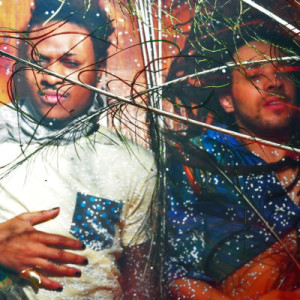 Q: So talk to me a little bit about yourself and how you guys came up with the name ‘Meridian Lights’ as a band title?

Yohimbe: My name’s Yohimbe Sampson, and I’m a guitar player. I’ve played in other bands in the Brooklyn music scene that I began with in (unclear) in the summer/December (unclear if he said summer or December?) and we started that a few years ago.

We were called Meridian at first, but there were so many Meridians that we, you know, kind of expanded on the concept and the name Lights. Meridian is kind of like… I really first started hearing about it when I was reading about people who had their vision restored.

They were saying that when your vision, living without the ability to see or if you can’t see (unclear), you have difficulty differentiating between… Like just because the sky is blue and the grass is green doesn’t mean that they’re separate.

It’s also, too, they talk about, you know, looking at things as one– continuous, like looking at the street or a mountain as one continuous thing, into the sky (unclear), as opposed to them being separate.

You know, so those are kind of the things, that Meridian, the word Meridian, kind of deals with. So that was definitely something that resonated with us while we’re trying to kind of deal with our music and our message. And then the Meridian lights part… that kind of came about as a way, I guess, to kind of specify or identify the way we feel when we’re connected to the power of music, the spirit of music.

For my whole life I’ve been really into music, you know, just loving and recognizing the way that music makes me feel. You know, since I was a kid I noticed that when I would play, even like sit down at a piano or something like that, just not even knowing what I’m doing, just touching the sounds (unclear), that I would feel emotions in what I was playing. It was pretty amazing.

It definitely motivated me to keep playing and, you know, I’ve been playing in Meridian Lights, I guess we’ve been doing it for three years as a band and you know we’ve been writing partners and you know performing with the rest of the guys for, I guess it’s like 3 years.

So what are you guys currently working on now? What are you releasing now? Diddy (?) said you have a new video? Talk to me about that new release and the overall projects.

We just finished some new stuff that we’re going to put out, so we got to get it mixed and all that, you know, so we kind of have some stuff coming out. We have another release that we’re going to put out, or at least have some songs we’re going to release before the new year, and we’re in the studio as a band starting next week so we should… you know, that’ll probably come out at the top of the new year. We’re just going out there and just really kind of just focusing on really doing positive collaborations with other artists and you know from different mediums and seeing what we can do together and how we can kind of experience art, not just as some isolated thing that we do in the studio or like you know the home studio you know, like what we do in real time with real people.

I think a lot about what we do is experiencing what humans can do when they’re coming together with a real positive mind and really starting to bond over (unclear) something creative. So we want to kind of continue to experience that with other people so we’re doing some travelling, you know. We’re going to continue touring and really focus on the Tristate right now, and we’re back (unclear) New York, we just got out of Oklahoma from (?) Texas (unclear)

Anybody you know people who can do videos and things like that, you know, get at us, we’re definitely trying to work.

Q: Talk to me a little bit about the overall band…

Q: So we were talking about how the band… This was the next question for you. I was going to ask you: How did the band basically come together overall? How did you guys meet? What was the high moment was it like, “Okay… we’ve got to work together. We have to continue to build this brand.” How did that happen?

Yohimbe: Well me and Brad both live in the same neighborhood and we knew people mutually, and we’d you know cross paths every once in a while but you know we didn’t know each other like that. But you know we both kind of found that we were both, actually kind of met up doing some community work, some early arts education work, and we were at an event for that and there was a guitar there and there were just people hanging out chillin’ out and I started playing the guitar and no one would sing, and brad got up and me and him just started jamming and you know someone walked by and say you guys should keep doing that and then right after that soon after that we got together and made our first song for the band. And we were just kind of doing a production project (unclear)

And I don’t know I guess it was more a production project but people started really wanting to experience our music live and they wanted to see us perform and I started to realize that the purity (unclear) and the way (unclear) Bradley approaches the vocals, people kind of wanted to experience that and the same thing people wanted to feel the music, like you know the guitar, the instruments, so you know we just started getting more and more performance opportunities and that kind of took us from the studio to the stage and it’s been going on ever since.

Q: Talk to me, since you just joined us, tell me how long have you been doing music and you know tell us a little bit about your role in the band

Brad: So I don’t know how long I’ve been doing music. Music was introduced to me at a young age because, mainly because of my stepfather, he’s a musician, and he plays about eight instruments so he came in my life at that right time you know I was like 11 and just probably after that I even have an uncle that is a musician as well to have it in my house constantly you know that is something he really exposed me to and um would just bring all sorts of music, mainly like Latin Jazz and like world music and  (unclear) from Africa and the Caribbean and I know that’s just like how were just built to pay attention to the vocals and um and that’s pretty much like how I got into music and I guess I didn’t really like start taking it seriously until we were in high school. I recognized like I had a voice so maybe I should use that.

My role in the band is… I mean, you know, I’m the vocalist. I’m the co-writer. I’m just the other half of Meridian Lights.

Q: So talk to me about that…what got you guys inspired to drop that new video 11? What was the whole inspiration behind this track?

I think the inspiration is kind of what I was talking about earlier in terms of just like experiencing art in real time. You know we’re over here working on a whole other project and song and everything, and it’s just starting to kind of… (unclear) jamming and improvising, Brad and myself, and it was a piece of music that we were like “This sounds kind of this sounds different than what we normally do, but this is an extension of what we can do, Ooh!” You know.

And we were kind of like “Wow this is cool.” The first thing we thought about was …. (unclear, most likely video producer’s name) and you know just like “Ay man you know you’re out here taking pictures and you’re documenting the world…”

We asked him (unclear) the music you might be able to do something with, so you know he came through and checked it out and he was like, “Yeah, man!” and he liked it. He went out in the world and he documented things that he felt related to music and what came out of it was a powerful piece of art.

Brad: We haven’t been working with Qwesi that long. We did our first project with Qwesi a song that Yohimbe actually wrote and it’s called ‘Forever’. We reached out to him because it really resonated with him and he decided he wanted to make a video for it. I think that has that been a year yet? Yohimbe, I can’t remember… but I think it was almost a year ago. We just built a friendship and uh, you know Qwesi and we respect him as an artist. We highly respect him as an artist. We personally think he’s kind of underrated because he’s an extremely talented man. We just met him and started vibing with him. We formed that friendship and then you know, he’s the homie. He’s an old school guy that we know. We shot ideas with and ever get a chance to meet him (unclear) and sit down with him.

Q: Awesome. Being that you guys are teachers, and you guys love music so much you are teaching the youth and other people, how is it teaching? And where do you guys currently teach at now?

We work in schools. We work in communities. We work in different places. Interacting with people is extremely different. It’s not always art. Like I just came from Southern (unclear) in east New York to teach senior citizens. We get it in with the community. We do our best to see, to kind of use our minds and our ears to kind of see and to utilize our special connections and our talents to create some kind of solution, depending on what it is. We also work in schools as well. I work out in the Bronx, Brooklyn, (unclear) in Brooklyn, Washington Heights, Harlem, the Bronx too, so ,you know, we out there.