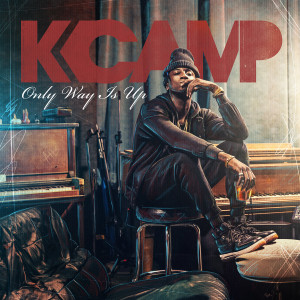 Should You Download “Only Way Is Up” by K Camp?

Released (September 4), Only Way Is Up by Atlanta Hip Hop artist K Camp, is a collection of new music with 16 tracks representing concepts of his musical journey thus far.  After, his breakthrough singles ‘Money Baby’ featuring Kwony Cash which is certified gold and ‘Cut Her Off’ featuring. 2 Chainz, which is certified platinum in 2014, K Camp managed to lay down credible and recognizable catchy hooks such as Lil Bit. Not sounding like anybody else K Camp has his own style and lane containing a nonchalant attitude that bolsters his sound making it contagious.

Straight out the gate, tracks such as, Comfortable, and ‘Change’ featuring Jeremiah (Produced by Nash Beats) highlights the artist ability to mix a laidback R&B sounds with Rap. It’s so effective and graceful; it seems to be his blueprint targeting the new listener, showcasing his ability to toggle between two genres. Produced by Big Fruit and Cali The Producer, Only Way Is Up  track ‘Til I Die,’ featuring T.I., gives us that banger; solidifying the authentic Atlanta vibe. You have Yo Gotti, featured on ‘Who Am I’ coming in the middle of the song with a distinctive verse.  Bun B features on, ‘B$tches N That Coupe,’ and Fetty Wap featured on ‘1Hunnid” (his fellow 2015 XXL Freshman Classmate). Perhaps, the best feature is with Snoop Dogg, ‘Rollin,’ the remix of the old classic ‘Gin and Juice. ‘Yellow Brick Road’ is a straight melodic sound without a feature and is arguably a favorite track. The Only Way Is Up is a good follow up installment from his previous mixtapes as a newcomer on the Interscope records label. This collection of his music showcases his artistic sensibilities for a commercial success. This rapper is a vocalist who can spit while creating hit after hit. Besides, a little quality music with an interesting story makes K Camp’s the Only Way Is Up an album worth the DOWNLOAD.

Below is the track listing of his new album Only Way Is Up.

Pittsburgh Rapper, Fat Corey is Out Here Eating… Musically That Is.